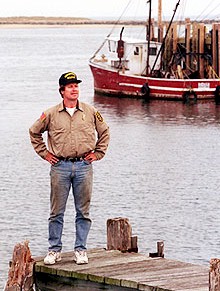 Harbor Master Michael Flanagan was always on the water. Winters were spent playing hockey for state champion Arlington High School, summers he was sailing or working as a commercial fisherman in Wellfleet, staying at his parents' house on Indian Neck. Back in the early '70s, Flanagan and his brother Patrick played left wing and center on Arlington teams that were perennial contenders for the state hockey championship, winning the title in 1971 and runner-up in 1972. They then went on to play hockey at Brown University in Providence, R.I.

Wellfleet Harbor Master Michael Flanagan is overseeing a variety of improvements on the waterfront. Summers, he and his brother worked on scallop boats. Flanagan put in five years on various boats dragging for quahogs and sea clams, and jigging for cod.

Flanagan served as assistant harbor master for three years, starting in 1995, completing the Harbor Master Basic Training Program sponsored by the Massachusetts Harbor Master Association. He is one of 61 certified harbor masters in the state.